K. L. Aspden has worked as a therapist with both children and adults since 1998. She has particular interest in the areas of trauma and anxiety, and she has experience working in both mainstream and special schools. She currently works in a school for children with emotional and behavioural difficulty, and is the author of Help! I’ve Got an Alarm Bell Going Off in My Head!: How Panic, Anxiety and Stress Affect Your Body.

1) What inspired you to write this book?
I work with some amazing children and teenagers, many of whom are frequently triggered into the fight/flight/freeze response. This can result in upsetting behaviours such as shouting, crying, hitting etc. They have no idea what is happening in their bodies and often feel too ashamed to talk about it, even when they are calmer. This is very sad. Having seen and heard what they go through, I wanted to write something to assure them that it is not their fault. I wanted to teach them about the physiology behind their feelings and show that there are things we can do to help ourselves. 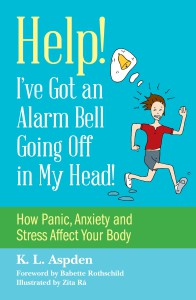 Above all I wanted to normalise this experience. Whilst we may not all react with the same intensity, everyone has an in-built ‘alarm bell’ (known as the amygdala) which can trigger powerful responses. An understanding of this can help anyone when they are going through periods of stress or anxiety.

2) Why did you decide to use the metaphor of an alarm bell?
I heard the panic response described as a ‘false alarm’ and decided to develop the idea. Alarms are so intrusive and distressing when they go off too frequently and at the wrong times – just like the overpowering feelings that can take over our bodies, minds and emotions when we are stressed. I wanted to communicate something of the jarring and disruptive effect of this through the alarm bell metaphor. I also thought it would be a non- threatening way to approach this tricky subject with my young clients.

3) You have worked as a therapist and at schools with children who have emotional and behavioural difficulties. What insight has that given you into how different people’s alarm bells work?
I think the alarm bell works in the same way for all of us, though it may affect us in different ways – could be trembling, feeling sick, withdrawing, tears, swearing…
For some people the alarm bell is set off more frequently because there are more triggers; this is especially true when trauma has occurred early in life or someone has high anxiety (for example, in autism). Children who have emotional/behavioural issues often live in a state of hyper-arousal – the alarm system is on red alert. In addition to this, they may lack the maturity or capacity to process their emotions which makes life even harder.
Those who have a stable background and an ability to reflect, often find it easier to learn to manage their responses. However, even the most vulnerable can benefit from being understood and supported by people who have an appreciation of the alarm system .

4) What triggers your alarm bell, and how do you take control back when you are feeling anxious or stressed? 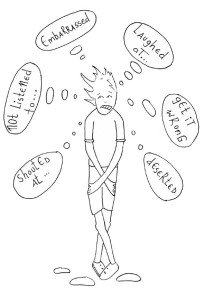 Over the years I have carefully considered my own triggers and where they come from.
When I was a teenager life was much harder than it is now. Like many young people I wanted to be liked and didn’t understand that sometimes others can put you down to make themselves feel better. I was often bullied. This affected my confidence and I became reluctant to speak in groups, preferring not to be noticed. When put on the spot in a group setting, my internal alarm bell would ring loudly and I would experience a sense of wanting to disappear; lots of thoughts would rush round my head about how bad the situation was, and of course, this made me feel worse. There are occasions even now when I can revisit those feelings, but I am much more equipped to deal with them.
The thing that most often sets my alarm ringing these days is ‘technology’ – when my laptop goes wrong or I don’t know how to do something because everything changes so fast and it’s hard to keep up.
If this happens, I remind myself that I am having a ‘false alarm’. It is not a real emergency.
I also use two suggestions from the book that work quickly in any situation:

In addition, I use Mindfulness in my everyday life (a discipline which helps to bring us back to the present moment), as well as a variety of creative activities. I find these tools are very soothing for the nervous system especially in times of stress or busyness.

5) Finally, what is the most important thing you would like readers to take away from your book?
I hope that an understanding of ‘the alarm system’ will help readers to feel more in control and more able to ask for help if they need it, without feeling embarrassed. I think a lot of people struggle because they don’’t know their difficulties are physiological.
Perhaps some readers will go further and become motivated to learn more about themselves. I would be especially pleased if they were to find the benefits of creativity in calming the nervous system, but that may be a subject for a whole new book.

You can find out more about the book, read reviews or order your copy here.