That is according to Nathalie Slosse, author of Big Tree is Sick, who tells the story of how the book came to be, as well as laying out her case for complete honesty as the best way to engage with children when helping them to understand serious illness.

In surveys on what values ​​we consider important, honesty is always highly rated, usually even as the most important quality. However, when it comes to honestly confiding something serious to our children, we often want to spare them the grief that the harsh truth can bring. It is a dilemma I struggled with when I was treated for breast cancer, and it’s why I want to provide a resource to others in the same situation today.

Sometimes people ask me “Did breast cancer change your way of life?” I wish I could reply that this was not the case; it’s true that prior to my diagnosis I followed my heart when it came to important life choices. But if I’m honest, I must admit that without the painful episode in 2007, I would not be doing what I do now. The battle I had with breast cancer as a mum of a two year old boy helped me discover that I can help people find happiness in difficult circumstances. In 2010 I founded the association Talismanneke to further explore that path.

But let’s start at the beginning.

On April 6, 2007 I was told that the lump in my left breast was a malignant tumor. A bolt from the blue! Like many mums my first reaction was focused on my son. I didn’t want to be an ill mummy! I sought support from fellow sufferers on the internet and discussed my concerns with physicians and psychologists. The first and most important conclusion I came to was to be honest, and not to be afraid to show my feelings.

Even though my son only spoke a few words, I told him what was going on. He barely reacted at that time, but he always listened carefully, when we were talking about my situation. On several occasions he showed us very clearly that he knew what was going on. He had a picture book with an image of a hospital. He pointed to the hospital, put his hand on his chest and said, “Ouch mama” while he looked at me. He couldn’t have been much clearer!

I was looking for ideas to engage my son at his level with the changes happening to me, for books that explained the situation to preschoolers. I found very little for children his age. To teach children to deal with strong emotions, the prevailing wisdom seemed to be to encourage them to draw – a frustrating piece of advice if your child can barely put lines on paper. So I decided to put my own creative mind to work and above all to listen to my son, because he also showed me new ways to process the changes. A toy man with removable hair became mama, as she was able to walk around with and without hair. Equipped with a syringe and band-aid, my son was suddenly a caring doctor for his bear who needed plenty of rest. 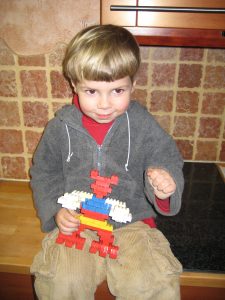 In order to introduce the idea of the treatment’s duration to him, we invented the “Cancer Monster”. A construction of Lego blocks made up of as many blocks as my chemotherapy sessions. Every night he could break down one block and move it to the “Okidoki-box”. So we went into a real battle with the cancer monster and broke him down stone after stone. Moreover, we used a different color for each course, so that the cyclic rhythm of treatment was clear for him. Each time a new color was started, mummy was again very ill and as more blocks of that color disappeared, she regained her strength.

Because he likes to craft, we helped him now and then to make a gift for mum. Very simple things, such as decorating a small picture frame with stickers or a medal for the patient, made from clay. They are still beautiful souvenirs.

Due to the positive feedback on our approach from friends and contacts in the hospital, the idea began to mature and I started to tell these tips to other parents. Only, I had no energy for it during treatment.

A year later, when I had to undergo a bone scan for the first time, I tried to dispel my fears by working on a children’s book. Thus “Big Tree Is Sick” was born, a story about Snibbles and his friend Big Tree. The doctor discovers wood worms beneath the bark of Big Tree and Snibbles world is completely turned upside down. Besides the story, there are also tips in the book to help young children get the chance in daily life to cope with a serious illness – not only (breast) cancer – both at home and in the classroom.
I tried to take into account the following elements:
– The feelings of the child
– The duration of the treatment and the side effects
– The illogical connection: ‘make sick in order to heal’
– The patient/sick person is not necessarily the child’s mum
– Active involvement of the child 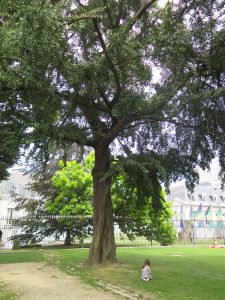 With the NGO Talismanneke I keep the story of Snibbles and his friend Big Tree alive. I provide lectures and workshops for children and adults. There is a Snibbles Tree in Brussels, a special place for the relatives of someone who is seriously ill, since September 2016. Several projects are currently underway in collaboration with other organizations, including other issues that are not obvious, such as unemployment or sudden death. At least I have my hands full!

My main message is to make children aware of what is going on as quickly and fairly as possible. I know all too well that you would prefer not to tell your child and that we are afraid to bring on our children’s feeling of grief, but by sharing the sad things together, the happy moments are all the more valuable.

Learning to deal with setbacks and grief is an important life lesson and an important skill in finding lasting happiness; you cannot pass it on early enough to your kids!

If you would like to read more articles like this and hear the latest news and offers on our health and wellbeing books, why not join our mailing list? We can send information by email or post as you prefer, and please also tell us about your areas of interest so we can send the most relevant information. You can unsubscribe at any time.