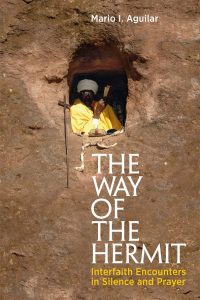 Mario I. Aguilar is Professor of Religion & Politics and Director of the Centre for the Study of Religion & Politics at the University of St Andrews. He is also a poet, an eremitic Camaldolese Benedictine Oblate, and has published widely in his interests in the theology of contemplation, the history of religion and issues of interfaith dialogue. We asked him some questions about his new book – The Way of the Hermit – and his life as a hermit.

A hermit’s lifestyle is one of solitude and seclusion from society. When and why did you decide to become a hermit?

As I mentioned in the opening of my book I always wanted to be a hermit. However, this wish had to wait for years as I was a missionary in Africa and then started an academic career. To become a hermit or a monk requires a long process of discernment and this process was carried out over a period of twenty years with the informal support of different spiritual directors. I would say that the decision was taken when Cardinal O’Brien encouraged me to follow this different path within the archdiocese of St. Andrews and Edinburgh. The hermitage and the daily routines developed out of an ongoing prayer life rather than out of an institutional setting. This was seven years ago in Scotland and then I opened a hermitage in Chile.

Some people might find it surprising that you are a professor of religion and a political activist, as well as a hermit. How do you balance these two different sides of your life?

There is only one single life in every human being, thus a hermit relies on a discipline of life where the day is marked by several activities. The life of a hermit, in my case in the Benedictine tradition, starts very early (3.45am) with meditation and silence until it is time to start the university day. During the day, I extend that prayer to those whom I teach and my fellow researchers. Political activism happens naturally because it is an extension of God’s action in the world, a world that should live more deeply justice, peace and understanding. I return to the hermitage happy to be left with God but with reports to be written on behalf of asylum seekers, correspondence, and my own academic studies currently related to India and Tibet.

Your book, The Way of the Hermit, documents your conversations with hermits in Scotland, Chile and India. Did the lives of these fellow pilgrims seem similar or different to your own, and in what ways?

The lives and hopes of all human beings are very similar as the Dalai Lama would reiterate. Thus, I have found a deep communion and friendship with others who seek the Absolute in India and Chile. Particularly in India I have met over the years Buddhist monks, Hindu Sadhus and Sikh scholars with whom we have shared not intellectual thoughts but our very souls, eating together, chanting, and laughing about the joys of being together. I must confess that I have found that many people who live a religious commitment tend to be sad, I do not understand that. On returning to see others at the Golden Temple or in the bathing areas of Varanasi I have always found a warm hand and a ready smile. God has given us a journey and it is great to do it with others even when in silence.

The book explores how living a life of silence and contemplation can contribute to interfaith dialogue. Could you explain how this is so?

The Western world uses too many words, too many texts and too many twitters. We try to understand something to accept its relevance. In silence the quarrels disappear because in silence and contemplation we cannot run away from who we are: human beings on a journey. The many dialogues between faith practitioners in conferences and formal meetings are very fruitful indeed. However, I have found a deeper dialogue sitting in silence with Hindus, Buddhists, Muslims and Sikhs because it is that very silence that binds us. I cannot speak Punjabi or Hindi but I can understand our common language of silence, reverence and devotion.

What have been the toughest challenges you’ve faced while living an eremitic lifestyle?

It has always been the challenges from outsiders who want a writer and a monk to become a small celebrity. I have had to clarify many times that hermits do not need other hermits to carry on their lives and that I do not have meditation classes in my hermitage. The keeping of a daily structure and discipline gets interrupted sometimes but I return to read the lives of hermits I admire and that set a very clear example for me: Abishiktananda, Bede Griffiths, Raimon Panikkar, and those sadhus without name who have inspired me in India over many years.

Do you have any advice for readers who would like to apply eremitic practises to their own lives?

Set a small routine of prayer and meditation for your daily life, start and keep to it. Do not read about it, or talk too much about it, just do it! And the Absolute will be waiting for you.