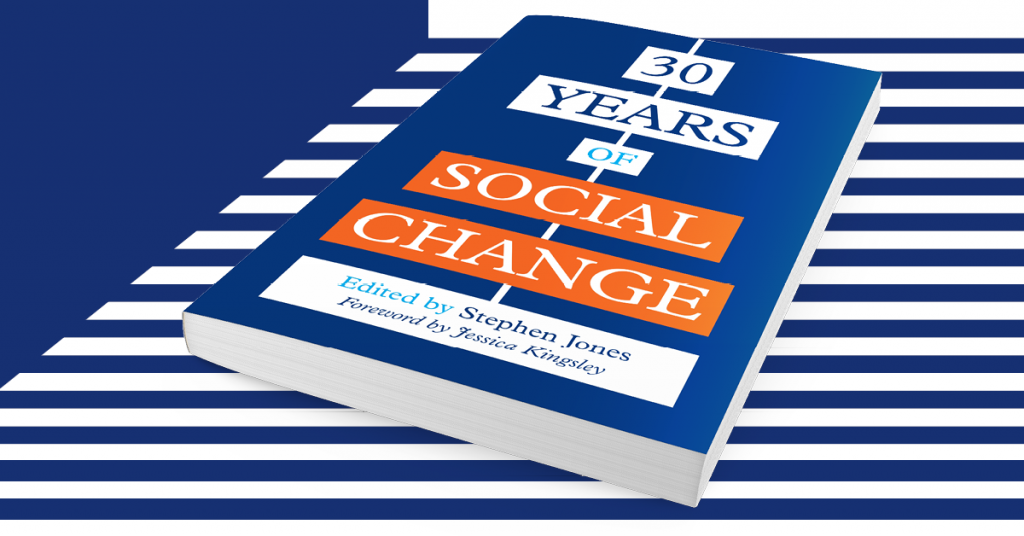 Sally Donovan, bestselling author of No Matter What and The Unofficial Guide to Adoptive Parenting, recounts how her journey as an adoptive parent has changed and shaped her as an individual, and discusses adoption’s place in the future. Her article is taken from 30 Years of Social Change which gathers together over 30 leading thinkers from diverse disciplines to reflect upon how their fields of expertise have evolved during those years.

Thirty years ago, as Jessica Kingsley Publishers was being formed, I was 18 and about to embark on my first experience of parenting. After finishing sixth form college I took the Eurolines coach to Paris and started work as an au-pair for an Anglo-French couple. He was a floppy-haired British banker who had something of a blonde Hugh Grant about him and she was a beautiful Parisian who spoke English like Princess Diana. I lived with them in their rented house just off Place Charles de Gaulle and cared for their 1 year-old son Pascal. It was kind of normal back then to go to a foreign country, move in with people you knew virtually nothing about and, with no experience, look after their precious child.

By luck and a bit of judgement the arrangement worked well. They got live-in childcare and I got to be based in central Paris and have the time of my life.

There were a lot of foreign au-pairs in the city and amongst us we shared knowledge about casual babysitting jobs. It was a way of making some ‘no strings’ extra money. Someone’s ‘Madame’ (not that kind) would have a friend who had a child that needed watching for an afternoon. An address and instructions about how to get into the appartment building would be provided and there you would find yourself, in a stranger’s appartment, looking after their wide-eyed child. This was (and may still be) common practice amongst the French upper class in the city.

One afternoon I babysat for an aristocratic family, the kind that grace the society pages of Paris Match. The only instruction I was given, before Madame swept out in a cloud of Chanel, was ‘do not let him damage the table’. I endured five very long hours of trying to divert their determined three year old from doing just that. Being who they were, the table was Louis XV and the little boys weapon of choice was a metal racing car. I was not entirely successful at carrying out the one instruction I had been given. Back then I worried about the table. Now both blessed and burdened with a working knowledge of attachment, I think about that child. Perhaps it’s no wonder he had a thing for his parents’ heirlooms. He knew what was precious and how to get a reaction (attachment-seeking not attention-seeking!).

Thirty years on and I parent through adoption children who belong, in a biological sense, to someone else and who have experience of being passed around. Who knows what ‘attachment style’ that little French boy with a grudge against Louis XV might have grown up with but nevertheless he was clean, warm, well-fed, demonstrably loved and I’m guessing safe. My children (I’ll refer to them as ‘my’ children for grammatical prudence and not through any desire to stamp ownership) weren’t born into a tastefully furnished life in the XVIth arrondissement. The details aren’t mine to share, but in bullish moments I wonder why it could be that nobody went to jail (if the victims had been adults then someone surely would have). The impact upon them as individuals has been significant and will be life long. That’s not to say they haven’t healed and flourished in many ways, but the trauma resulting from the abuse they experienced is evident every single day.

The job of understanding that trauma, the behaviours rooted in it and learning to parent appropriately has been and I suspect will be my life’s work (something my 18 year-old self would never have guessed).  It is harder than I could ever have imagined and it has torn away many of my old beliefs and values: many that I had thought of as indisputable. The process of becoming the parent my children need me to be has been one of taking apart who I once was, and rebuilding myself from the bottom up. I’ve had to learn that they see the world differently to me, in fundamental ways; where I see plenty, they see danger of famine, where I see kindness they see a motive, where I see support, they see loss of control. Not all the old parts of me have been discarded. Some hang on by their fingernails because they are part of my survival and core to who I am and some have come in useful (ridiculous determination, never able to do things by half). It’s a way of life that exposes us to our potential depths as well as our heights.

The lion’s share of my parenting is done and although we still fall over at times, the foundations are strong and I feel positive about the future. I’ve made mistakes, but I have done my best, with the resources I’ve had and there is little of substance I would do differently. I’m not keen on expressions of pride, but when taking the long view I occasionally get a sense, in a small domestic way, of how enormous our achievement has been. Plenty of furniture (none of it Louis XV) has got in the way but we’ve aced some big wins: the biggest being permanence.

Permanence is the golden ticket in terms of building strong foundations for children’s futures and right now, the state and the judiciary are wrestling with its different forms and their relative benefits and drawbacks. There are some enormous tensions playing out that buckle and strain against each other like vast tectonic plates. Some of the language used about adoption (‘draconican’, ‘forced’, ‘heart’, ‘forever’ …) is indicative of that strain and will not I fear progress things in meaningful and thoughtful ways. Where this will take us over the next thirty years is hard to guess. Will adoption still exist as a permanence option? I don’t know but I hope the baby doesn’t get thrown out with the bath water (something I’m pleased to report that even as an 18 year old au-pair I never did).

As Jessica Kingsley Publishers celebrates its thirtieth year, I witness my children starting to make their own way in the world. It is both wonderful and terrifying (will that darned cause and effect thinking ever fall into place?) and the ‘drip drip’ of worry is constant. Life will never be straightforward for us and I’m mostly (but sometimes not) at ease with that.  My role and influence is diminishing and my life, which has been dominated by hard-core parenting, is starting to open up again. It’s liberating and quite exciting. I might even get back to Paris, rediscover that plucky 18 year-old and tell her she did all right.