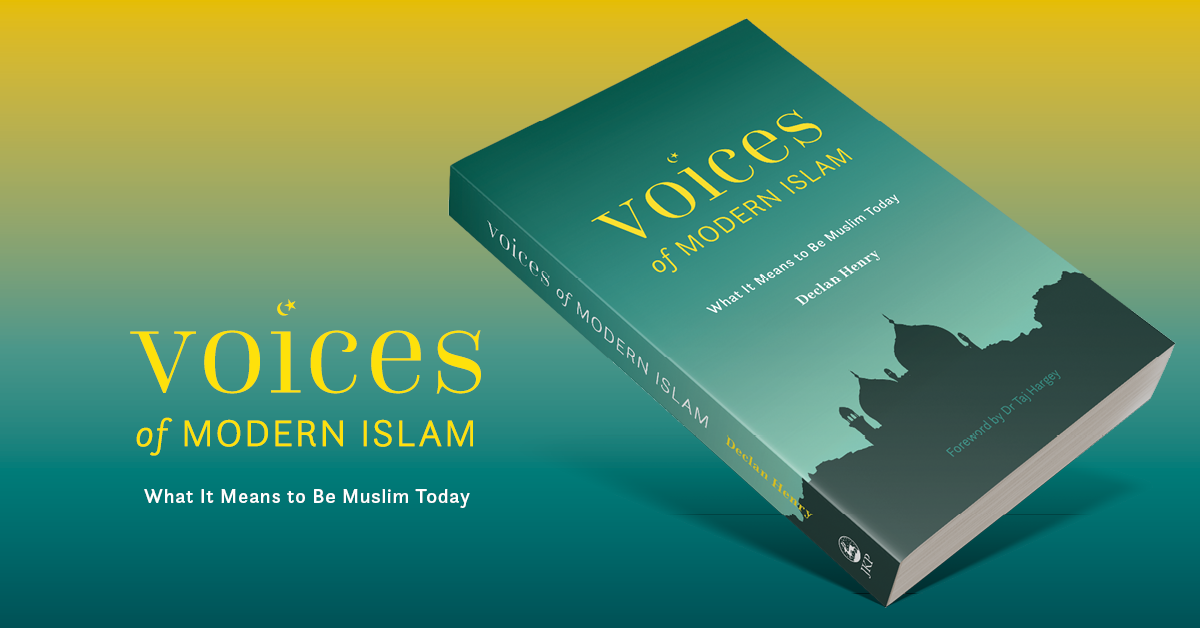 As the rising Muslim population in Britain increasingly affects our lives it has become an essential requirement to know what Muslims believe and how they fit in with modern Britain. So, when they speak, they should at least be given a fair hearing.

But perhaps Declan Henry is not the author you would expect for a book centred around a portrayal of the Islamic faith in today’s Britain; he is firstly, not a Muslim, and secondly a Catholic Irishman. However, it quickly comes to light that he himself has been on a journey of learning and discovery with Islam and this is the same journey he so elegantly takes the reader on throughout his book.

Voices of Modern Islam guides the reader through the fundamentals of what Muslims believe, the history, the key concepts, the common misconceptions, and then introduces more controversial topics such as islamophobia, extremism and sexuality.

The positioning of the chapters is crucial in the success of painting a diverse, fair and true picture of Islam. The reader must truly understand the essence of the religion and the reasoning behind traditions and beliefs to be able to critically evaluate the later chapters and to really challenge the prejudices and stereotypes that Britain holds against Muslims – perhaps the real purpose of this book.

One of the most successful and enjoyable aspects of this read is the opportunity to hear from a variety of different people about Islam. Henry interviewed over 100 Muslims for his book and by intertwining chapters with views from different people, he shows the diverse and often strong personal opinions the interviewees have regarding their faith.

There are 3.1 million Muslims in Britain and it is an important feature of this book that Henry has taken the time to not only interview but carefully select these quotes to present as wide a range of opinions as possible. Although this paints a reasonably accurate picture in terms of what modern Muslim views are, their interpretations of Islam are not always accurate – but this is what gives the readers insight into what people believe, rather than what is actually in the Quran.

The interviewees include scholars and imams as well as the ordinary Muslims we have as neighbours and workmates, which helps to prevent a potential bias of responses. The quotes add dimension and understanding, giving readers an excellent perception into how Muslims in the UK practice their faith and justify their beliefs and actions. While remaining impartial, Henry’s respect for the religion is clear.

Henry’s neutral standpoint does not mean, however, that this is a dull read. The book remains informative and the quotes often evoke strong emotions; plenty of spark a for lively discussion and debate. One of the most remarkable parts of the book features in the fifth chapter and explores homosexuality and Islam and this in itself is one of the subjects generally avoided but in the book people pour out their feelings and views. The juxtaposition of these views next to the life stories of homosexuality in the community is powerful.

Voices of Modern Islam gives readers a real taste of Islam in the UK, demonstrating how Muslims practice their religion day-to-day, as well as how they interpret their faith. This is not only beneficial to those with little knowledge of the faith but also for Muslims, as it may teach them many things about their religion that they did not previously know or perhaps a different perspective on a topic that they had not considered before.

It could be argued that there is a lack of critical analysis of Islam from Henry but that is not the purpose of this book; Henry is a raconteur, sharing the stories of his interviewees as a way to demonstrate and explore the religion and challenge assumptions. Indirectly, he also uses these interviews to show the conflicting opinions in Islam and create discussion around how Islam should be applied to modern-day concepts. This is a fascinating read for all and emphasises how everyone can learn something, regardless of background, about the faith and lives of others.

For more information on Declan’s new book, or to buy your copy, click here.