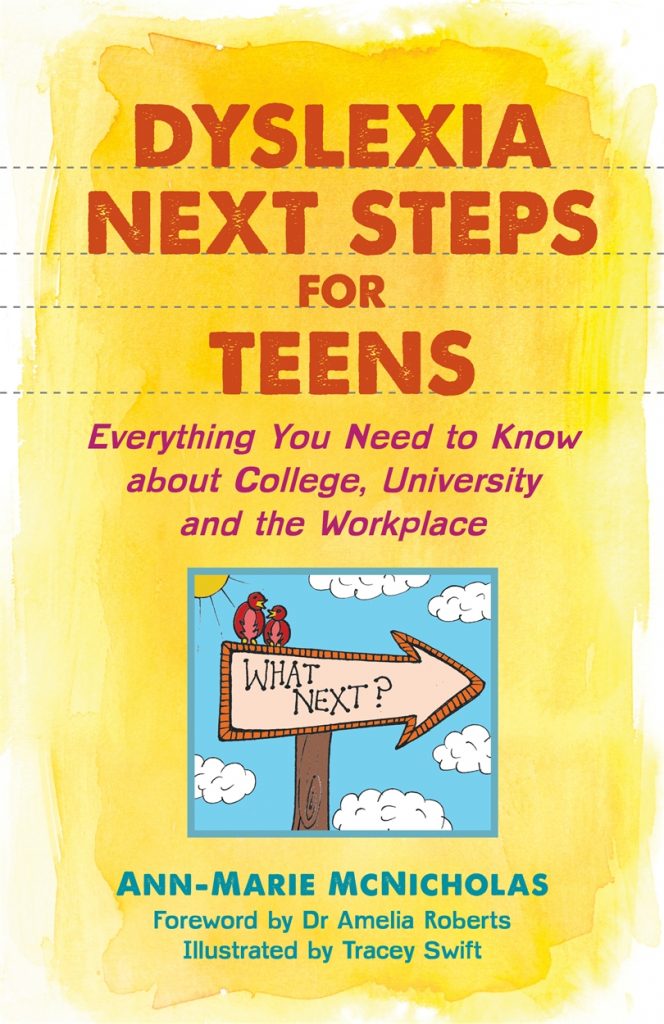 Learning support advisor Ann-Marie McNicholas describes how there are many options available to young people with dyslexia when they leave school, which they might not always be aware of.  She is the author of Dyslexia Next Steps for Teens: Everything You Need to Know about College, University and the Workplace.

It’s around 7pm on a cold, November evening and the rest of college is buzzing with music, activities and chatter as hundreds of year 10 and 11 pupils attend our vibrant Open Evening, to see if this is where they want to study for the next two or three years of their life.

A worried looking parent cautiously enters the relative tranquillity of our learning support area. She appears tired and fraught.

‘I don’t even know if I’m in the right place’, she begins. I lead her to my office, invite her to take a seat and get her a drink.

‘Billy is refusing to come in’, she explains. ‘It was a job to even get him into the car to come here. He’s sitting there, sulking, saying I’m wasting my time. Well, I’ve had seven years of banging on doors and wasting my time’, she says. ‘It’s what I do’.

She goes on to explain that Billy, in his final year of school, has no idea what he wants to do after school, has no real interest in his future and has basically written himself off, saying he won’t pass any exams and no one would employ him, so what’s the point?

It transpires that he has had a tough time at school. He was diagnosed with dyslexia at around eight years of age, after struggling and falling behind in literacy and numeracy. Things didn’t improve much in high school as they both felt he got left behind. ‘He really struggles with reading and writing’, she says. She candidly informs me that Billy will often refuse support at school – ‘he doesn’t want anyone sitting next to him ‘pecking his head’ as he says’. Teachers are doing their best but Billy just isn’t interested. Consequently, mum is called into school on a regular basis to discuss his lack of engagement and effort and his minor misdemeanours. ‘He’s a good kid, ‘ she says fiercely, ‘ but things just seem to have gone so wrong for him.’

Billy believes that college is for the ‘clever kids’ and that he won’t be offered a place as he won’t get the grades. Mum doesn’t really believe this, but I can see the worry and the questions in her eyes. ‘I’m at the end of my tether,’ she says. ‘I feel like I’ve done nothing but fight for him for the last seven years.’ She pauses and takes a deep breath.

‘Is there anything you can do for him at college?’

The long discussion that followed is basically the essence of this book. I explain to Billy’s mum that there is a place and a course for Billy at college whatever his school grades and that college really is a fresh start for many young people just like Billy. She is surprised to learn of the course choices available and of the different types of support on offer, including technology support designed to help young people like Billy to be able to work more independently. We also talk about pathways after college and employment options and support. Finally, we discuss ways of smoothing the transition to college for Billy, helping to prepare him for the challenging move.

She says it is a shame that Billy wouldn’t come with her to hear all of this, but we both understand that Billy isn’t really being obstinate, stubborn or defiant. Billy is scared.

This book is written for Billy and the hundreds of thousands of young people with dyslexia like him, to answer the myriad questions I have been asked over the years and to provide the advice and guidance that can make the difference between a smooth transition to college and a difficult transition.

Often, young people with dyslexia and their families are not aware of their rights and entitlements at college, which can lead to some learners struggling in silence without appropriate support. There is also a lack of knowledge about the wide variety of courses and choices available once they leave school.

Leaving behind the relative security of school for a larger, unfamiliar place is daunting for many learners. Even for the professionals working in the school sector supporting these young people through transition, the world of further education and beyond can be somewhat of a mystery.

Yet, being aware of the options available and planning ahead for transition is the key to college success.  Making the right choice of college and course, ensuring that appropriate support is in place early in the course and minimising the anxiety and worry associated with change sets the young person on the right track from day one.

Dyslexia Next Steps for Teens was written to address gaps in current information and knowledge about what happens to young people with dyslexia when leaving school. It provides answers to a wide range of worries, concerns and issues that these teens encounter when approaching school leaving age, so that they feel empowered, knowing who to ask and crucially knowing what to ask, to help them to make the right decisions for their future.

I got to see Billy at the next Open Evening. He was wary and monosyllabic, but he listened, there was a lot of nodding from him and he agreed to attend some transition days.

Two and a half years later, he had achieved a qualification in IT and passed GCSE English. He was a funny, engaging and enthusiastic young man and very popular with his peers and with staff. Mum was often contacted about Billy, but it was only to tell her about his progress and achievements.

Billy and his family are not unique. They represent hundreds of thousands of teens and their families who will face the transition to college at some point.

I hope Dyslexia Next Steps for Teens enables these young people to realise that  it doesn’t really matter what went on in the past, because with appropriate guidance and support, going to college can be a new beginning filled with hope and opportunity.

If you would like to read more articles on dyslexia and get the latest news and offers on our Education books, why not join our mailing list? We can send information by email or post as you prefer. You may also be interested in liking our Special Education, PSHE and Early Years Resources Facebook page.

Time to shout-out some of the publishers of the #FurtherEducation content currently available on the Education Platform!
⭐️@JKPBooks
⭐️@KoganPage
⭐️@pearson

Sign up for the Education Platform today: https://bit.ly/2WiMYl5 #edchat #teacherchat