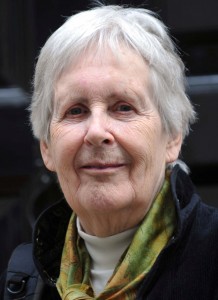 Phoebe Caldwell has worked for over 35 years as a practitioner with people whose severe learning disabilities are linked with behavioural distress, and in 2009 was awarded the Times / Sternberg Award for pioneering autism treatment. Here she answers some questions about her new DVD, Autism and Intensive Interaction. (Photo courtesy of The Times)

Why did you decide to do this video project? How did you come to work with Penny Mytton and the young people at her school?

Although the approach know as Intensive Interaction has been available since the 1980’s, it has relied on direct person-to-person teaching and until recently there has been remarkably little training material generally available. It really is important to see it done. In 2002, the video, ‘Learning the Language’ (Pavilion) was published which showed how it was possible to make contact with a young man with severe autism at the low functioning end of the spectrum. When I met Penny Mytton, I’d been looking for some time for a suitable venue to make a film illustrating how it was possible to develop interaction with children with autism. Although she had done some work with members of her class, the conditions for the film, Autism and Intensive Interaction were that I had never seen the children before and that they were selected on the basis that staff were having difficulty in getting in touch with them. We developed a very good working partnership.

Children with autism have difficulties with the interelated processes of dealing with incoming information and sensory overload. The ensuing chaos in the brain triggers responses from the autonomic nervous system (confusion, pain and sometimes heat in various intensities.)  They are desperate to work out the pattern of what is happening in the kaleidoscope world around them: they call it ‘looking for coherence’. Intensive Interaction is about reading and using a person’s own body language to bypass their disorganised processing system, using signals that have meaning for the brain, ones that are part of the hard-wired-in physical sensations that people use with themselves. At the same time, people with autism tell us that it is not true that they do not want to communicate, they do feel lonely and do love people but they cannot handle the physical feedback they are getting from their own bodies. Intensive Interaction allows us to get round this. We all, autistic or not, monitor body language all the time, since it lets us know how people feel. Put simply, if a child on the spectrum is, for example, flapping their hand, they may be doing it gently or violently. The first tells us they are calm and the second that they are extremely upset. Using signals the brain recognises empathetically permits us to tune in and align ourselves with how the child feels. Their attention is shifted from solitary self-stimulation to shared activity. Stress is reduced: they begin to feel secure.

What does ‘success’ look like in a child or adult who has benefited from Intensive Interaction?

The most immediate change is that the child relaxes, often within minutes of the brain recognising its signal but coming from ‘out there’. Intensive Interaction is not a cure for autism, it’s more about learning the language that has meaning for the child or adult and using it to build up non-verbal conversations and develop ongoing interaction. But frame-by-frame analyses of film (Dundee University Psychology Department) shows that although the timeline may vary, there is always an increase in eye contact, desire to move closer and social responsiveness. In addition, once the stress level comes down, the child’s brain starts to work more effectively. They can often generalise, copy hand movements and sometimes speech emerges. A teacher, who I have not met but had tried using body language to communicate after reading my books, wrote about the long-term benefits. Using Intensive Interaction she says, ‘five often distressed and isolated children begin to feel safe, valued and part of a social community at last’.

Half my work is with children and half is with adults. Some of the adults are deeply disturbed. Although Intensive Interaction is based on the infant-mother paradigm (infant initiates, mother confirms and baby moves on), this primary communication process is one that stays with us the rest of our lives. Whether we are on the spectrum or not we continue to respond to events that our brain recognises, provided they are part of our personal repertoire. Contrary to what is sometimes supposed, using people’s repetitive behaviours as a basis for communication does not encourage these behaviours, rather it shifts the child’s attention to the world outside themselves. Whether I am working with adults or children, the approach is the same: In order to give them an environment that has meaning, I am looking to reduce those inputs to which they are oversensitive and to increase those which do not clog up the brain with unprocessed images, sounds and sensations.

Every April we celebrate Autism Awareness. What do you see as the most pressing issues regarding Autism awareness today?

Apart from the need for early diagnosis, perhaps the most urgent issue is teacher training, which in many cases is woefully inadequate. All teachers need autism training now since, given the latest NAS figure that one child in ninety-seven is on the spectrum, teachers are going to meet them in mainstream schools let alone special schools. I recently came across fourth year students who were being sent out to special schools with no autism training at all. They were completely unaware of the sensory difficulties experienced by children on the spectrum and had no idea how to procede in the face of children who were unable to communicate and were disturbed.