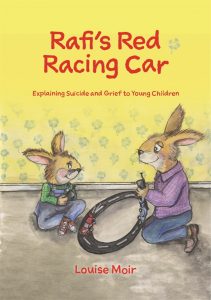 Louise Moir explains why she wrote Rafi’s Red Racing Car, details her own experiences, and expresses the need for a breakdown in the stigma that surrounds mental illness and suicide.

I lost my husband to suicide in 2011 following his brief decline into mental ill health that was triggered by a job redundancy. My sons were aged 4 ½ and nineteen months. Rafi’s Red Racing Car is the book that I wished I’d had at that time to help me with the terribly painful and bewildering task of trying to explain to my boys what had happened to their Daddy.

Before their father’s suicide, my children had not yet experienced death of any kind, so they had absolutely no understanding. I quickly learnt that their grief was too raw and overwhelming for them to be able to tolerate me talking directly about the tragedy that had enveloped us all. Very young children are very visual and respond well to explanations in pictorial or metaphoric realms. I found a wealth of good, age appropriate books that helped to explain death and the emotions that surround loss and these helped tremendously. Identifying with the character in the book who was experiencing similar events and emotions to themselves enabled my sons to externalise their own feelings, begin to understand their experience and led to them asking me questions about their own loss.

These picture books were invaluable in helping my children to begin to understand and process their bereavement and gave them the message that it was OK to talk about it. But how was I going to explain the specific nature of their loss? How on earth do you explain suicide to such young children? My natural instinct was to protect them from the pain and bewilderment of dealing with the suicide of their father, yet I knew that they would need to know the truth.

Child bereavement organisations recommend that children bereaved by suicide are given factual information in small steps by an adult they trust, delivered in a language appropriate to their age. To help me do this, I searched for resources on this subject for young children and found nothing. There are a few good picture books or therapeutic work books for older children but compared to the amount of books about loss generally, there are a very small number of books about suicide for children of any age. I think this, in itself, speaks volumes about the silence and stigma that surrounds suicide.

When I was in the process of arranging a launch party for Rafi’s Red Racing Car and I had problems finding a venue for the simple reason that people do not want to be associated with this subject; it evokes discomfort and avoidance. I had twice booked a venue with two popular places that were very happy to hold a party for my children’s book that I initially explained was about ‘loss and grief’,  which it is. When I later mentioned the ‘S’ word, they promptly backed out. This blatant discrimination and antiquated judgement extends to the subject of mental illness generally. I strongly believe that the only way to break down the fears, myths and stigma that surrounds suicide is to talk openly about it. Any child who has experienced a loss by suicide will be grappling with enormously painful and bewildering emotions. Adding shame and negative judgement to their loss is unacceptable and very harmful.

So let’s start talking openly about suicide and mental illness without judgement. It is my hope that Rafi’s Red Racing Car will help to chip away the taboos surrounding this subject and help young children affected by suicide begin to understand their loss and residual feelings of grief.

If you would like to read Rafi’s Red Racing Car, you can buy it here.

If you would like to read more articles like Louise’s and hear the latest news and offers on our Social Work and Mental Health books, why not join our mailing list? We can send information by email or post as you prefer, and please also tell us about your areas of interest so we can send the most relevant information. You can unsubscribe at any time.