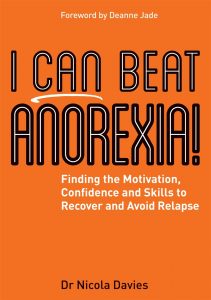 Dr Nicola Davies is a health psychologist, counsellor, and writer specialising in raising awareness about health, wellbeing and weight loss. She is a member of the British Psychological Society and the British Association for Counselling and Psychotherapy. Nicola also keeps a health psychology blog and runs an online forum for counsellors. She is the author of I Can Beat Obesity! and I Can Beat Anorexia! and the co-author of the Eating Disorder Recovery Handbook.

While generally regarded as two separate, very different issues, anorexia and obesity actually share many similarities – not only in terms of risk factors, but also psychological, behavioural, cognitive, genetic, and neuropsychological similarities.

Risk Factor Similarities
There are similarities between obesity and anorexia, including dieting behaviour, low self-esteem, childhood abuse, body image dissatisfaction, and bullying related to weight. When exposed to these risk factors, individuals can respond by using food as a way to gain a sense of control over their lives – either under or overeating in an effort to numb or push down difficult feelings.

Psychological Similarities
Body dissatisfaction and low self-esteem are common in people with anorexia and obesity. In one study, it was found that people with anorexia undergo a shame-shame cycle, in which shame is both the cause and result of the eating disorder. Interestingly, the same pattern has been noted in people who are obese. In another study comprising of people with a range of eating disorders, including anorexia and obesity, while shame was the biggest predictor for development of eating disorders, guilt also played a key role. Depression, anxiety, and mood disorders are also common in both conditions.

Behavioural Similarities
While someone with anorexia may under-eat and someone with obesity may over-eat, both are behaviourally controlled by food. Both may also eat in secret due to shame around the need or desire to eat. They may both also be driven by a desire to restrict food, with one avoiding food altogether and another caving in to this natural need. Someone with anorexia may over-eat on occasion, while someone who is obese may make efforts to under-eat. This is why obesity can transition to anorexia and vice versa.

Cognitive Similarities
People with both conditions have a tendency towards cognitive distortions – a negatively biased way of thinking about oneself and the environment. Cognitive distortions can come in a variety of ways, including filtering (i.e. magnifying negative details and downplaying the positive), polarized thinking (i.e. thinking in terms of either/or), and overgeneralisations (i.e. expecting unpleasant events or feelings to happen again and again).

Genetic/Biological Similarities
Not only are both conditions heritable, but they can also be related to levels of two hormones – leptin and ghrelin. Leptin, a peptide neurotransmitter hormone secreted by fat cells, is often referred to as an “anti-obesity hormone” as high levels of leptin significantly inhibit food intake by indicating to the brain that the body has received nourishment. Research has found that people who become obese due to high-fat diets are desensitised to leptin. Interestingly, in individuals with anorexia, this hormone has been found to be at low levels.

Ghrelin, a hormone that is released by the stomach, functions as a “hunger hormone,” stimulating the appetite and increasing fat storage. Its levels are generally regulated by a person’s intake of food. High ghrelin levels are correlated to times when an individual is hungry, for example, when someone is fasting. Studies have found obese people have significantly lower ghrelin levels. In contrast, the same study showed that those with anorexia have significantly increased ghrelin levels.

While leptin and ghrelin levels may differ between people with anorexia and obesity, both hormones appear to play a key role in eating behaviours.

Anorexia and Obesity: You Can Beat Them!
The good news is that another similarity between anorexia is that you can beat them! If you have the will, motivation, and confidence to overcome them, you can. My two books – I Can Beat Obesity!: Finding the Motivation, Confidence and Skills to Lose Weight and Avoid Relapse and I Can Beat Anorexia!: Finding the Motivation, Confidence and Skills to Recover and Avoid Relapse – act as friendly companions to help you build that will, motivation, and confidence. You will gain new skills as you journey through the workbooks, with the exercises and activities encouraging a positive mindset to help you achieve your long-term well-being goals.

If you would like to read more articles like Nicola’s and hear the latest news and offers on our Social Work and Mental Health books, why not join our mailing list? We can send information by email or post as you prefer, and please also tell us about your areas of interest so we can send the most relevant information. You can unsubscribe at any time.