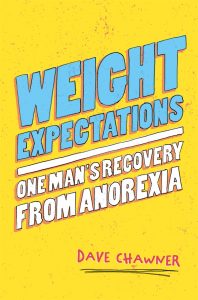 Dave Chawner, author of Weight Expectations, is a mental health campaigner, an award winning stand-up comedian and anorexia survivor. In this blog, he addresses the stigma around mental health and the damage it causes.

The horrible truth of the matter is bad news sells!  It’s awful, but it’s true – when was the last time you watched News at 10 for a pick me up?! Think about it, which one of these are you going to read:

1.) A story about a violent, hooded gang going door-to-door rampaging your neighbourhood armed with guns, machetes and meat cleavers

2.) A story about a local gang of Cub-Scouts going door-to-door selling cakes for a local donkey sanctuary armed with Battenberg, Lemon Drizzle and Vicky Sponge

Call me cynical, but I don’t think even the Cub-Scouts would read their story given that choice. Shocking stories are the ones that grab you and suck you in. It makes sense when you think about it – the knife-wielding gang are a teensy bit more of a concern than Akela and his cupcakes. It’s called ‘negativity bias’ (which isn’t the new Morrissey album). It’s a theory that states stories of a negative nature have a greater impact than positive accounts. Basically, the more shocking a story, the more gripping it is. Now, this is all well and good, but you might be thinking, ‘how does this apply to mental health?’ It’s a good question and I’m glad you asked.

When people kept telling me I was anorexic I thought they were ridiculous. I wasn’t Daily-Mail-shocking-style anorexic, I didn’t look like a posterboy for Comic Relief and never had a rib cage you could play like a xylophone. I never felt ‘anorexic enough’ to admit I had a problem (with time and hindsight, I now appreciate that eating disorders are a disease of the mind, not the body – BMI is no more of an indicator of health than shoe size – but at the time I didn’t appreciate this). Negativity bias meant that all the stories I read, heard or watched were the most extreme cases. That made me feel like a fraud, like I wasn’t really ill like people in newspapers or on TV.

By only talking about mental illness rather than mental health we make the whole conversation negative rather than positive – it’s not about staying healthy, but about avoiding illness. So, no wonder people are reluctant to talk about it. That, coupled with the focus on the extreme cases means we make those people who do experience mental illness feel guilty because they are not ‘ill enough’.

You don’t have to be unfit to go to the gym, in the same way that you don’t have to be ill to look after your mental health. I wish someone had told me that. And, there doesn’t seem a better time than Mental Health Awareness Week to tell other people that either.

Want more Dave? Click here to read an extract from his book ‘Weight Expectations: One Man’s Recovery from Anorexia’

If you would like to read more articles like this and hear the latest news and offers on our Social Work and Mental Health books, why not join our mailing list? We can send information by email or post as you prefer, and please also tell us about your areas of interest so we can send the most relevant information. You can unsubscribe at any time.