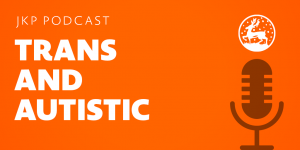 Laura’s memoir, Uncomfortable Labels, is out in July and available to pre-order here.

Listen to the podcast here.

Laura to Andrew (our Senior Commissioning Editor): What was it about my memoir that caught your attention?

Laura to Andrew: Have you seen any increase in publishing on gender identity and autism?

Andrew to Laura: How would you describe the crossover between the three intersecting identities of trans, gay and autistic?

A to L: When were you diagnosed with autism?

A to L: Did you have the lightbulb moment about being gay and trans?

A to L: Challenges of being trans and autistic – what might a neurotypical person not consider?

A to L: Overlap between trans and autism – why do you think this is?

A to L: Advice for people who are questioning their gender?