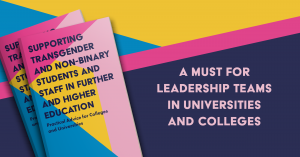 How can we best support trans, nonbinary and gender diverse people in our college and university communities when they are coming out or transitioning?

This extract is taken from Supporting Transgender and Non-Binary Students and Staff in Further and Higher Education by Matson Lawrence and Stephanie McKendry.

The experience of each person is unique to them. To take a holistic view, every student and staff member is an individual, each with distinct identities, circumstances, contexts and intersecting experiences. Further factors also impact, such as the nature of a person’s transition (social, medical, both or none), where they are on their transition journey or trajectory, and how they are perceived by others on a day-to-day basis. All of these factors will make the experience and necessary support very different for each individual.

The two examples below demonstrate how institutions can support the needs of the individuals.

More examples like this can be found in Chapter 9 of Supporting Transgender and Non-Binary Students and Staff in Further and Higher Education.

Tom is approaching the end of a two-year further education course at college. As a gender diverse teenager, Tom had difficulties at home and his family were unsupportive of his gender identity and expression. Aged just 16, he moved to a new city and began a course at college. As housing was not provided by the college, Tom moved into private student accommodation; with frequent parties and drug use taking place around him, this environment felt very unsafe and unstable for him. During this time, Tom was also further exploring and questioning his gender identity, yet did not feel able to come out to his fellow students as trans.

By the second year of his course, Tom came out as a trans man to his classmates and his tutors. Tom told his close classmates about his change of name and pronouns, and he asked them to inform their other classmates. His experience with his peers was generally very positive, and he connected with other trans and non-binary students around the college. Tom then told his tutors that he is trans, that he identified as a man, and had changed his name to ‘Tom’. He received some awkward reactions and probative questions from his generally well-meaning but ill-equipped course tutors. This made Tom feel very uncomfortable at times. While Tom was generally willing to be open about his trans identity and his experiences, he found it challenging to educate his tutors and field their questions about his transition.

Now aged 18, Tom is applying for college courses in a different city to continue his arts education, admission to which depends on successful interviews and auditions. Tom wants to access gender-affirming healthcare and is still on the long waiting list for the Gender Identity Clinic, and so has not yet started testosterone hormone therapy. He is very anxious about the interviews and auditions because he feels he doesn’t ‘pass’ as male. He is, as a result, concerned that he will be misgendered and misunderstood. He is unsure of how and when to communicate with the new college about his gender identity and trans status, and is worried about the potential impact of this additional pressure upon his interview performance.

What would help Tom?

• Support with housing issues and finding alternative accommodation. As many further education colleges do not provide student accommodation, specific consideration needs to be given as to how students like Tom can be supported in locating suitable and safe housing.

• Review of safeguarding policies and protocols, particularly with respect to supporting students aged below 18 who are living away from their parents or legal guardians, and how to safeguard potentially vulnerable students like Tom who are trans, gender diverse and/or LGB+.

• Referral to bespoke estrangement support, such as Stand Alone – an organisation for those estranged from their family, with specific advice for students and LGBT+ young people.

• Programme of embedded training for staff and students to raise the basic level of awareness on trans and gender diverse issues across campus and in the classroom.

• Named contact at new institution. This would hopefully empower Tom to get in touch to discuss his concerns about the upcoming interview, and to communicate how he should be addressed and referred to. If Tom is also expected to audition, conversations around the gender of the character may also be necessary, to ensure the panel is made aware in advance.

Patrick is a post-doctoral researcher at a university. Patrick came out as a non-binary trans person during his first year in the role. In a letter to his head of department, Patrick stated that he was changing his name to ‘Patrick’, that he identifies as trans and nonbinary, and that he uses ‘he/him’ and ‘they/them’ pronouns. His head of department invited him for a meeting and she was generally very supportive, but did not seem to fully understand Patrick’s identity, concerns and support requirements. Patrick then emailed all of their colleagues to inform them of the changes.

While most of his colleagues have been supportive, Patrick has the distinct impression that they do not fully understand trans and non-binary identities, and he has been faced with some quite personal and uncomfortable questions from colleagues. Others consistently refer to him using the wrong name and pronouns, despite being corrected and reminded repeatedly. Patrick feels unable to confide in their head of department, as she has also  made several ill-judged comments in reference to trans people and to Patrick. Unable to bear the weight of educating alone, Patrick feels that his department could benefit from trans-awareness training and for his colleagues to champion trans inclusion in the department. Yet Patrick is aware that if a referral or request for training is made, they will know it likely originated from him, which he fears will draw further attention to him and his trans status.

Patrick is also often misgendered when meeting new colleagues and external partners. Patrick finds these situations increasingly difficult to deal with and has begun to avoid external meetings, conferences and networking events. Patrick feels saddened and frustrated by this, particularly given how important these opportunities are for their career development and further employment opportunities. Patrick has also been offered the opportunity to teach on an undergraduate course, yet he is very concerned about whether the students will respect him as a nonbinary trans person. Patrick needs support to fulfil their full potential and develop their academic career.

What would help Patrick?

• Support from colleagues by introducing names and pronouns in all settings, making it easier for Patrick to disclose his.

• Trans or LGB+ allies or champions programme so that others take the initiative and responsibility for raising awareness and championing trans equality.

• Named contact for staff to provide bespoke support and guidance to Patrick. The named contact may also be able to assist in conversations with Patrick’s colleagues and department.

• Departmental and university initiatives around trans and LGBT+ equality, including events, activities, training and work towards achieving a charter mark. Instigating these conversations on departmental and institutional levels can serve to direct the focus away from specific individuals and towards a focus on wider structural and cultural change.

• Trans policy with clear code of conduct and accountability processes to set out the institution’s expectations and what recourse individuals have if they are facing difficulties from colleagues or students.

• Trans and gender diversity awareness sessions for students, both as part of induction and in core modules.

Follow this link to buy a copy of  Supporting Transgender and Non-Binary Students and Staff in Further and Higher Education.