Kate E. Reynolds, JKP author, researcher and speaker,  recently gave a talk about how parents can and should be confident in educating their children about sex and relationships.  Here, Kate updates us on how it was received. 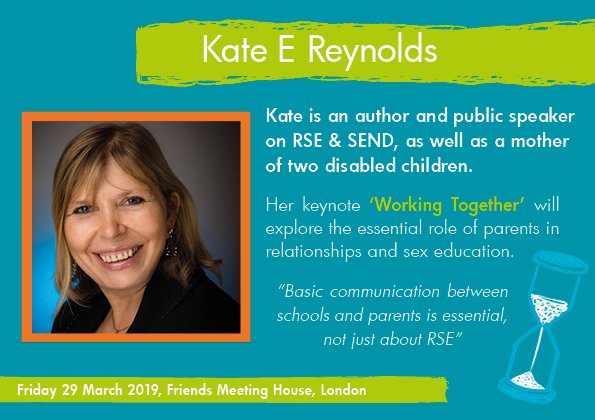 It may seem that the House of Commons doesn’t agree on much at the moment, but in March its members voted overwhelmingly for Relationships and Sex Education (RSE) to be inclusive, up-to-date and compulsory in all schools in England. In preparation for this new legislation, due to be implemented in schools by September 2020, the Sex Education Forum and the Council for Disabled Children organised a second annual conference titled ‘Countdown to Mandatory RSE’.

Initially directed to a theatre-style auditorium, I noticed the word ‘Maths’ on the screen and shrank out of that conference room. Definitely not my subject. In the labyrinthine Friends House building (in Euston) I was redirected to a light and airy conference room for the delegates of ‘Countdown to Statutory RSE’. Not a seat was empty.

People had come from all over England, largely teaching staff and a handful of parents. A hubbub of enthusiastic voices was interrupted by our chair, the Director of the Council for Disabled Children, Dame Christine Lenehan, who guided us through all proceedings. She was the epitome of not judging by appearances; this seemingly unassuming, almost grandmotherly figure was more than capable of ensuring every speaker stuck to time and any delegates who thought to waffle or hold court when given a microphone to ask a question were closed down without hesitation. That’s what being a chair is about. From my perspective, as the last keynote speaker, I was delighted to know that my whole 15 minutes wouldn’t be nibbled away before I had a chance to open my mouth.

Lucy Emmerson, Director of the Sex Education Forum (SEF), led us through the latest Government guidance on the introduction of compulsory relationships and sex education in September 2020. She outlined the work of the SEF and its resources to support schools in developing and implementing RSE policies and the curriculum.

Richard Lawrence, representing MENCAP, outlined what people with learning disabilities might consider good quality RSE education. As a person with learning disabilities, he emphasised the importance of learning about LGBT issues, whether the person themselves identified as being LGBT or simply to be aware of this population in society. This is an essential component of inclusive relationships and sex education.

Junior Jimoh asked the boldest question of the day – who had had sex in the room (not the sexual act in the room, of course, but who of the delegates had). He spoke in a whisper from a wheelchair. His words were relayed to people at the back of the room by a support worker.  Alongside Richard Lawrence, Junior gave real substance and personal experiences to what can sometimes feel like academic discussions at conferences. 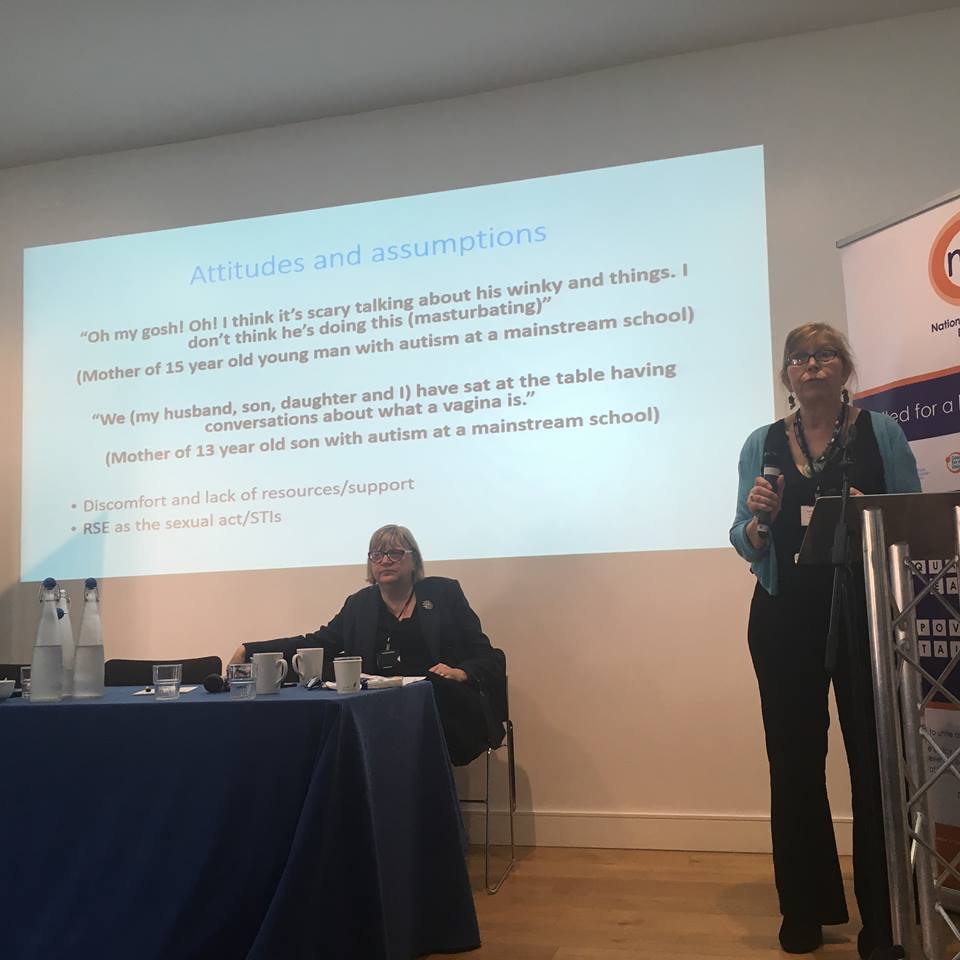 And my contribution? I had fifteen minutes to present the key points about parents and informal relationships and sex education. Sometimes it can be hard to convey the many differences as well as similarities among parents, especially in a contained time span, so I decided to use quotes from parents (with permission). For example, I contrasted the mother of a young man with autism (he was diagnosed with Asperger Syndrome) who found the whole subject of sex so uncomfortable that she referred to his having a ‘winky’ and visibly cringed when she told me that her son “wasn’t doing that” nodding towards the word masturbation in an exercise we were doing. Contrasted with this was a mother of a similarly diagnosed teenage boy who informed me that her whole family (husband, daughter, son and herself) would sit around the dining table discussing periods and sex as the topics arose.

I briefly explored the negativity that many parents experience when their child is diagnosed or when dealing with schools. Another mother in this instance spoke of “so-called professionals” who had told her and her husband that their son “would never read or amount to anything” but, despite having a learning disability alongside autism, today their son is able to read the time from his new watch. It’s important for teaching staff to understand parents’ experiences and how this might be reflected in their dealings with schools.

However, the main thrust of what I said was to encourage schools to work closely with parents around the subject of relationships and sex education (RSE). Not only would this support parents, who may not feel confident in broaching the topic, but might guide some parents who might otherwise withdraw their children from RSE lessons. Being clear about what areas would be discussed according to the age and development of children and young people, enables parents to engage in and support their children’s formal learning about relationships and sexuality. Knowledge of the RSE curriculum also helps parents to give consistent messages at home.

I ran a workshop for around 45 participants with Lucy Emmerson. Enthusiasm was plentiful as ideas were bounced around each group and relayed to the entire room. What was most striking for me was the general lack of competition among the delegates, who came across as supportive and interested in gaining knowledge. In my experience that isn’t always the case at conferences and workshops, when sometimes delegates appear to be using the opportunity to demonstrate their own skills and knowledge without necessarily the desire to learn from other people. Another ‘plus’ is that the representative from the Department for Education (DfE) stayed for the entirety of the conference, participating in workshops.

Excellent conference to be repeated next year – one to look out for!