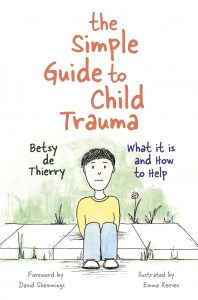 Betsy de Thierry, author of The Simple Guide to Child Trauma, discusses the pressures on children and young people and how societal influences are causing an increase in anxiety and depression.

Some recent data has become available which gives evidence to our experience in the services we are running in the UK.

• 235,000 young people in England were in contact with NHS mental health services at the end of June 2016
• Almost a quarter of a million children and young people are receiving help from NHS mental health services for problems such as anxiety, depression and eating disorders
• 235,189 people aged 18 and under get specialist care, according to data covering 60% of mental health trusts in England (11,849 boys and girls aged five and under among those getting help)
(The Guardian. 3rd October 2016)
• NHS study finds:
o 12.6% of women aged 16-24 screen positive for PTSD
o 19.7% self-harm
o 28.2% have mental health condition
o Between 1993 and 2014 there was a 35% rise in adults reporting severe symptoms of common mental disorders.
(The Guardian. 26th October 2016)

Children have never been so stressed and lacking in healthy relational experience. The irony is that parents are hugely stressed too, often with the need to earn enough money to buy their children what they think they need to stop them being bullied (the right brands or electronics). How ironic and sad.

Family life is so often dominated by screens. This lack of face to face experience causes isolation and a disconnect from reality. As a result of children’s brains becoming used to this high level of stimulation from electronics, schools are having to facilitate forest school classes and teach children how to play without the use of toys that have a quick response, as if it were a skill that is foreign to so many.

Then there is the issue of bullying. The bullies used to be people who children and young people could walk away from at the end of the school day, but now they use technology and the harassment continues, sometimes 24/7. They are often unable to emotionally rest because if they don’t use phones and apps, they can end up becoming socially isolated. If they do use them regularly, they risk being harassed, teased and sent inappropriate comments and pictures. There seems to be no easy solution.

Bruce Perry, a leading child psychiatrist and neuroscientist, says, ‘some children have so few positive relational experiences that they don’t develop the capacity to be socially appropriate, empathic, self regulating and humane. By the time they reach age 10, they have only had the number and quality of positive social interactions that a typical 5 year old gets’.
(Perry 2008)

Schools are also having to put increased pressure on children, assessing them almost constantly. Teachers are more exhausted and stressed, and it’s becoming normal for children as young as six to experience anxiety about upcoming assessments. Children should be thinking about what food they want to eat for dinner or if they can kick a football better than yesterday. They should be worried about nothing but the concern of how to peel a banana with gloves on.  Children don’t have the psychological maturity to be able to sustain anxiety about issues like academic performance or ranking within the classroom. They should be having fun and learning about things they find themselves curious about.

Assessments have always been a part of the teacher’s role within a classroom, but they were informal and gathered through work and chatting to children. Now, children often know where they rank in different subjects as young as seven years old. What utter madness!

Those of us who have worked with adults struggling with mental health issues know that many first began to struggle when they were ranked in their classes back in the 1970’s. It seems we are now in a situation where yet another generation are growing up with their innocence shattered as they are led to believe that academia is the most valuable asset to be valued.

If we have a society with the highest levels of anxiety, self harm, suicide and depression we have ever known amongst children and young people and yet we have simultaneously chosen to increase pressure in schools, limit creative subjects and daily assemblies where morals were taught and children sang together, what did we expect? It seems obvious to me that the endorphins released when people sing together results in a stronger feeling of belonging, essential for emotional safety, causing a natural decrease in insecurity, which then causes a natural decrease in bullying behaviours. Creative subjects are fundamental for the sensory stimulation and the facilitation of neural activity in diverse areas of the brain.

Would we enjoy a world where there are no musicians and no concerts, no artists, galleries or exhibitions, only crockery made in bulk and graphics made to fit all possible expected projects? No new ideas, only projects that fall within the expectations of a highly controlling society that has non-negotiable values and norms of behaviour. I’m fairly sure I am defining hell when I speak of the loss of originality and creativity, yet the current education system is offering us exactly that. With only small moments of creativity, heavily monitored and assessed, fear reigns in the environment as staff work constantly to avoid being labelled a class that has achieved lower than the expected targets.

Children need free play, outside air, friendships, adults who really care, and opportunities to creative, laugh and learn. Teenagers need help to learn to celebrate their uniqueness and explore what dreams lie in their hearts, to know that there are different routes to those dreams and to know that getting straight A’s doesn’t make you happy!

References:
The Guardian. 26th September 2016. Mental illness soars amongst young women in England –survey reveals.
The Guardian. 3rd October 2016. Quarter of a million children receiving mental health care in England.
Perry. B. (2008) The boy who was raised as a dog. Basic Books.