Fittingly, Sally Cat’s first ever blog piece is about her first book, PDA by PDAers, which is out now. Here, she describes how the online support and discussion group that fuelled the book came about and flourished, despite her PDA sometimes getting in the way. You can visit her PDA blog to learn more.

I’ve been thinking about writing a blog for a while.  I’m good with words, have opinions and an understanding of PDA, but my PDA (pathological demand avoidance) has actually scuppered me into a kind of helpless paralysis. Demand Avoidance has told me that blog writing is “too difficult”.  It says, “you’ll get lost and waffle on irrelevantly”; “people will be bored”; “it would take up too much time” and this negative brush with which my subliminal demand avoidance has painted the concept of blog writing has left me feeling terrified of even trying.  However, JKP have invited me to write a blog to coincide with the launch of my book, PDA by PDAers, and (after much avoiding and, in facing it, feeling physically sick) here goes! 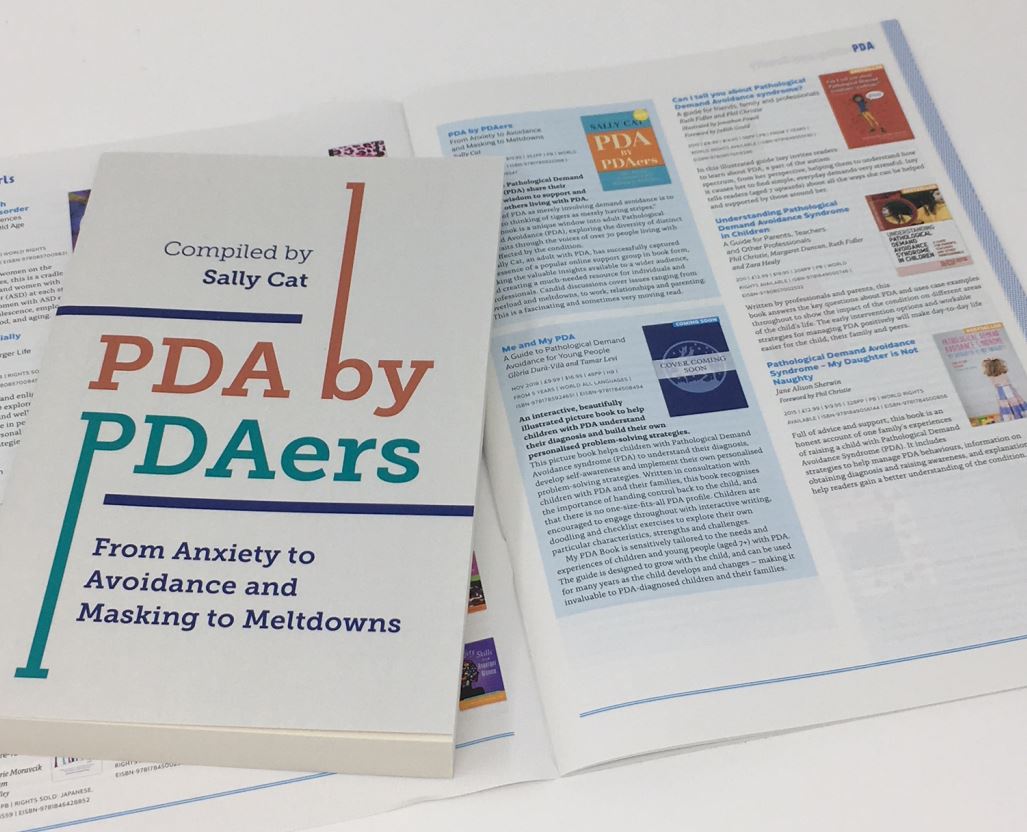 PDA to me is a wondrous, many faceted beast.  I equate it to a tiger in the introduction to PDA by PDAers where I say that thinking of PDA as merely comprising Demand Avoidance is akin to thinking of tigers as comprising only stripes.  We PDAers, as I have come to know us, have metaphorical teeth, claws and bodies finely honed for leaping too. We experience extreme, hard-wired anxiety, which we tend to feel compelled to mask (for, I believe, equally hard-wired reasons).  We fight injustice and fearlessly defend victimised people and animals. We have wonderful imaginations and breadth of lateral thinking. We have our own minds and think out our own, well-considered codes of ethics. We are vulnerable though to social pressures and need personal control and quiet space in order to thrive.  There is a myth-conception amongst the few who are aware of PDA that we feel no shame during meltdown, but this is untrue. Melting down is involuntary and we observe ourselves in mute horror then, once our meltdowns are over, tend to hide our shame behind involuntary masks. 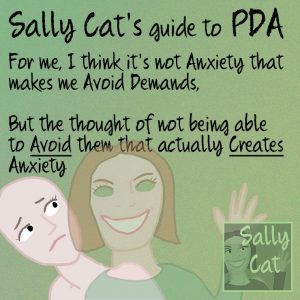 There have been drives to rename PDA “EDA” (extreme demand avoidance) in the belief that we feel the term “pathological” to be negative.  The vast majority of PDAers I have spoken with are completely happy with the name PDA. “Extreme” sounds like a lifestyle choice (as in “extreme sports”) and fails to convey the hard-wired, all-pervasive nature of our demand avoidance.  Our Demand Avoidance is pathological in that it is rooted in our inborn neurology.  There have been multiple posts over the years within the Facebook Adult PDA Support Network (whose discussions are transcribed in my book) querying the best name for PDA – we PDAers love inventing new names for things – but, as I say, PDA has remained our firm favourite and what little recognition we have is attached to this name.

I was inspired to start producing my graphic memes and create my Facebook page in January 2017 following an animation I produced about my PDA journey called “Masquerade”.  I had a ton of Demand Avoidance against producing memes (similar to the issues described in my opening paragraph here), so I based my first memes on animation stills to minimise the demand of producing them.  The animation itself has a deliberately scratchy drawing style, again adopted to minimise demands. In life, I have passions to create and communicate, but I must always battle Demand Avoidance to do so. 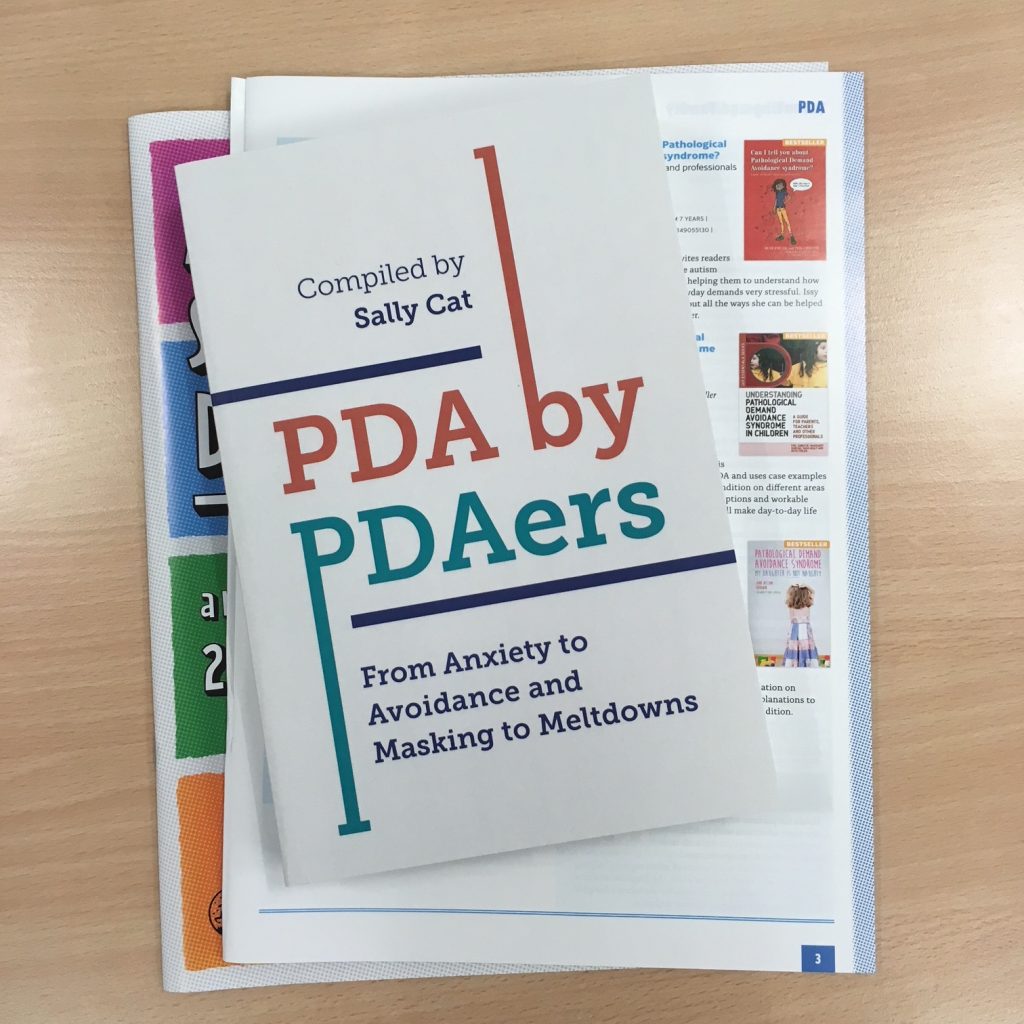 I was happily amazed by the popularity of my memes and the positive feedback inspired me to keep producing them. I feel my PDA meme-making is a direct expression of my life path so far. In following my interests, I have trained in psychology, digital art and person-centred counselling (which prizes the power of active empathy and involves heightening self-awareness & expression).  It took me several months to overcome Demand Avoidance and contact PDA Society to offer to work with them. I now produce their artwork and was invited to speak at their conference in April this year (2018), which was terrifying, exciting and a great honour.

I’ve been quite moved by the number of private messages sent to my page by adults connecting with PDA, parents, carers and even professionals telling me how helpful my memes have been in communicating PDA either to themselves or others.  Some – three to be precise – people have complained that I don’t represent all PDA and I *should* put a disclaimer on my memes to state this. Their *should* attitude has on all occasions triggered instant Demand Avoidance, but I have felt duty-bound to mull this over anyway (despite Demand Avoidance screaming, “do NOT do what they say!” in the back of my head). I have decided that:
1) I want to keep my memes as visually uncluttered as possible
2) they are entitled “Sally Cat’s Guide To PDA” (not “Definitive Description Of…”)
3) I have only managed to continue producing these memes in the face of Demand Avoidance by the skin of my metaphorical teeth
4) adding a disclaimer would boost my Demand Avoidance to insurmountable levels, and,
5) I feel that the weight of positive feedback I’ve been receiving & the PDA-empathy my memes help to create outweighs these three nay-sayers (my Demand Avoidance was very happy when I came to this decision!).
OK, I admit, I am not perfect, but I do my best and do feel, like I’ve said, that my memes on the whole are a positive force for increasing PDA awareness and understanding. 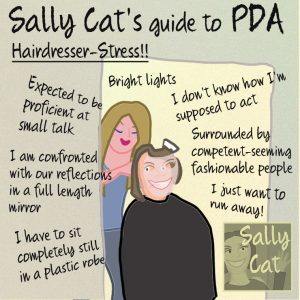 I have high hopes that *my* book, PDA by PDAers will play a similar role in increasing PDA awareness and understanding (I write *my* this way because I really don’t consider the book to be *mine*: I compiled it from the contributions of over seventy fellow adult PDAers, and I consider it to be our book).  The little attention that has been given to PDA has tended to focus on children with more extrovert profiles. Introverted PDAers (those of us who, like myself and my daughter, mask our meltdowns and are not bossy in public) have slipped through the already-too-small net. Adult PDAers have been ignored too. PDA Society only added dedicated adult provision to their website in 2017 (I was pleased to be one of the adults consulted in the formation of this).  Adult PDA may be dismissed by society as non-existent; assessment and diagnoses may be refused to us because PDA is not named in the current manuals (neither is Asperger’s); and the provisions we need may be refused, BUT we still exist and are unable to flourish in society without these provisions.

PDAers have an incalculable potential of positives that would bless society if society only acknowledged our existence and specific needs: space; respect; choice and freedom.  Give us these things and you’ll be amazed by how much we give back!

If you would like to read more articles like this and get the latest news and offers on our books about autism, why not join our mailing list? We can send information by email or post as you prefer. You may also be interested in liking our Autism, Asperger’s and related conditions Facebook page.
You can also read our PDA Day blog HERE, and visit Sally Cat’s own PDA blog HERE.

What a treat to have @danieljharding4 in today signing copies upcoming book Gay Man Talking! 🗣💙